Ten years removed from the housing collapse of 2007-2008, home prices have rebounded back to pre-crisis levels and beyond in many markets.  This month we look at the state of housing and how that critical part of the American experience is playing out across the country.

At first glance, it appears that after a long decade of recovery, the housing market in the U.S. is stronger than it has been in a generation.  Much of the regulation put in after the crisis, directed at ensuring people can afford the homes they are buying, has laid a much stronger foundation of ownership than in the mid-2000’s, employment is high, wages are growing, and despite rising into the 4.5% range recently, mortgage rates are still well below historical averages (For the twenty-year period 1997-2017 the average mortgage rate was just under 6%).

With that backdrop, it is no wonder that the average time spent on market for a home in March was less than 30 days and, in some markets, up to three-quarters of sales are closing above asking price after multiple offers. 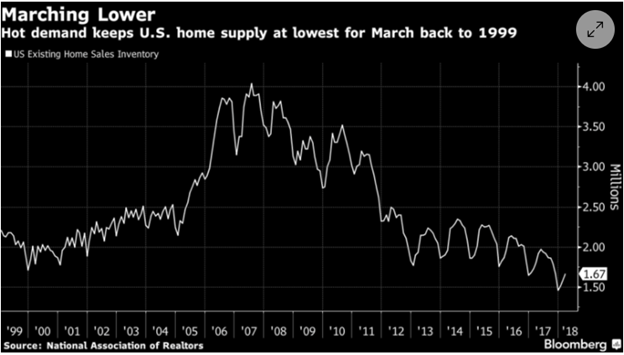 Median sales price rose 5.8% year over year in March to $250,400.  This rise in prices is fueled in large part by the lowest inventory in at least 20 years, with available properties down 7.2% year over year to only 1.67M. 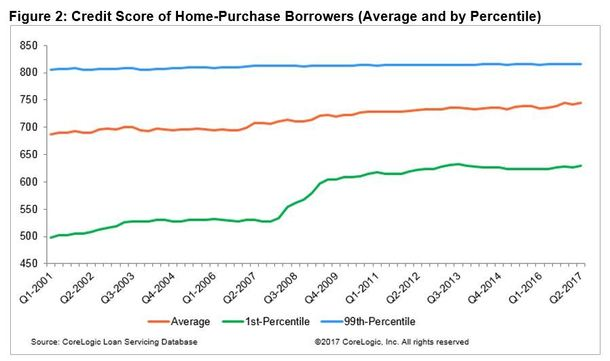 One of the major contributing factors to the housing crisis in 2008 was the significant number of sub-prime borrowers.  Since then, the 1st percentile, or lowest approved borrowers, have credit scores about 100 points higher than pre-crisis.  This is an indication of a much stronger base of ownership with less likely default rates.

But the strength in the housing market is entirely dependent on who you ask.  For brokers, sellers, and landlords, the market is as strong as it has ever been.  But looking underneath the headlines, you will find that for many Americans the housing market is anything but healthy, especially for first-time buyers or buyers of more modest means.  Sales of homes priced between $100,000 and $250,000 were down 7.8 percent from a year ago, while homes at $750,000 or above were up more than 15%, and those lower priced homes are often going for well-above asking price.

This is evidence of a secondary effect from 2008, when investors both large and small bought hundreds of thousands of foreclosed properties and turned them in to rentals.  There are currently 8 million more renter-occupied homes than there were in 2007.  These investors could take advantage of high prices and sell at a profit but many of them locked in rock-bottom financing at depressed prices and are making significant positive cash flow on high rents, lessening the incentive to do so.

This environment has resulted in a woefully mismatched housing market where we have about the same inventory as we did in the mid 1990’s, but with 50-60 million more people in the country.  We are experiencing the opposite problem we saw in 2006, when builders were initiating 1.4 single-family housing starts for every household formed, now that number is closer to 0.7.

It is hard to overstate the severity of the shortage.  The months’ supply of existing homes – how long it would take to sell the current inventory at the most recent sales pace – sits at an extremely low reading of 3.6 months, up from an even lower 3.4 months in February.  According to the National Association of Realtors, anything less than 5 months supply (a level we haven’t seen since 2015) is considered tight.

It took 10 years, but the home price index has reached back and exceeded the prior peak in 2006-2007.  Fueled by low supply and highly competitive markets. 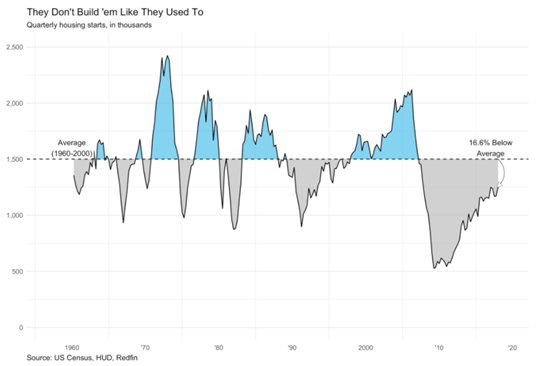 Despite the low inventory across the country, housing starts are still less than half what they were at the peak of the last cycle, and well under the average.  Several reasons can be cited for this, including a dearth of home builders following mass bankruptcies a decade ago, a shortage of construction workers to fill available jobs, and increasing land, material, and regulatory costs at the lower price points.

The under supply of inventory is not because home builders don’t want to build, it is largely a combination of two factors; higher input prices are squeezing margins at lower price points and because they simply can’t find enough workers to meet demand.  As a result, these companies are focusing on larger projects; multifamily units and higher priced homes where the margins are better, and they can keep workers on a job for longer periods of time. 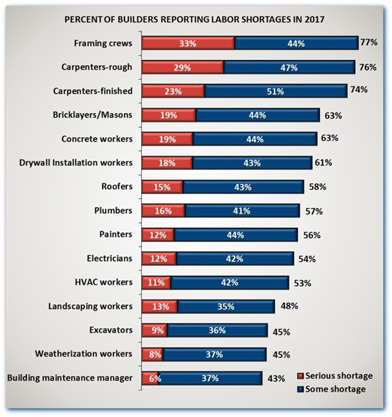 More older skilled construction workers are retiring than are young people joining the trades to replace them.  This is leading to a severe shortage in carpenters, masons, framers, roofers and on down the list.  Chart from Eye on Housing.

It is this confluence of factors that has led to what appears to be a healthy industry when you look at rising prices in competitive markets, but the rosy headlines are masking some significant problems.  The home ownership rate declined for eight consecutive years from 2008-2016, only slightly rebounding in 2017 (Figure 6).  So, while the foundation of the market is undoubtedly stronger than it was at the prior market peak, much of the population is being priced out of owning a home.  At the end of the day, the hallmark of a truly healthy real estate market is availability of homes for those who are willing and able to purchase them.  It is in this respect that the market is perhaps not as healthy as it may seem. 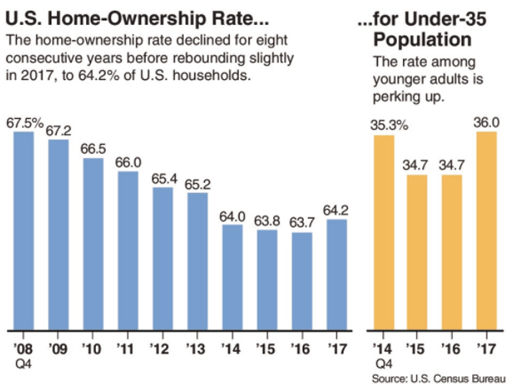 It is hard to call a housing market healthy when we are at multi-decade lows in ownership numbers and only about a third of the under-35 population owns a home.  The recent uptick is encouraging however, as wages rise and draw more young households in to the market.

The opinions voiced in this material are for general information only and are not intended to provide specific advice or recommendations for any individual.  To determine what is appropriate for you, consult a qualified professional.

The economic forecasts set forth in the presentation may not develop as predicted and there can be no guarantee that strategies promoted will be successful.