You may have been hearing the terms ‘yield curve’ and ‘inversion’ mentioned in the financial press recently, most likely with negative connotations.  This month we will discuss this indicator, and how it relates to economies and the markets.

When you hear that the Federal Reserve is ‘raising/lowering interest rates’ it can be easy to assume that the Fed is setting interest rates across the economy.  In reality though, the Fed is only moving one rate.  It is called the Federal Funds rate, and it is the rate at which financial institutions lend money to each other on an overnight basis, usually to meet capital requirements.  This is a single-day rate, and it makes up the very short end of what is known as the yield curve.  Figure 1 shows the various configurations of this curve, with the yields (rates) on the vertical axis and time to maturity on the horizontal axis.  The ‘curve’ is the line that connects the yields on various time-to-maturity bonds.

The Federal Funds rate is all the way on the left-hand side as one of the shortest-term rates.  When people refer to the curve being ‘flat’, ‘steep’, or ‘inverted’, they are generally referring to the difference between the yield on the 10 year and two-year U.S. Treasuries.

As of writing, the current yield curve sits between normal and flat, with the trend towards further flattening and a possible inversion. (Source: Morningstar.com)

If you think through how the banking system works, the curve starts to make a lot more sense.  Customers deposit funds in the bank in their savings accounts, perhaps in CD’s and earn interest.  These are usually shorter-term instruments and the rates are relatively low in a normal environment.  Customers also take loans from the bank in the form of car loans, mortgages, etc. and pay interest to the bank; rates which are usually higher than the rates they earn on deposits.  The difference is called the interest margin and it is the most basic way in which banks make money.  In a normal yield curve environment, the system functions well as credit is flowing, customers are earning interest on deposits, and paying interest on loans.  Everyone gets what they need.

As the yield curve approaches a flat structure, where your short-term CD rates may be close to the same as the 30-year mortgage, there is less of an incentive for the bank to make loans.  Why would they, if there is no interest margin to be earned?  Now think about an inversion, where the short-term rates are higher than the long-term rates; the result is that credit and loan making activity can slow significantly.  This inhibits people from purchasing homes, getting loans for their businesses, and generally signals an economic slowdown.  Why would a bank offer a 4% 30-year mortgage, when they must pay 5% for a 2-year CD?!  Makes intuitive sense that they wouldn’t be inclined to do so.  This is the essence of the yield curve and why it is important. 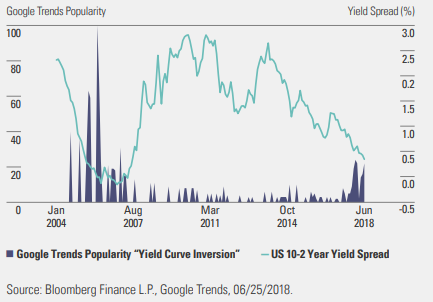 We are seeing a resurgence in the Google trends popularity of the search term “Yield Curve Inversion”, like what we saw in 2005-2007.  (Source: State Street Global Advisors)

So why is this such a closely watched indicator?  Well, as we have just discussed, it makes intuitive sense that an inversion would indicate a slowdown.  But more than that, the empirical evidence backs up it being a reliable predictor of recession over the last 40 years.  In fact, each of the last 7 recessions were preceded by a yield curve inversion. (Ben Carlson, “Yield Curve inversions and Stocks Are a Toxic Mix,” Bloomberg, December 18. 2017.)

Yield curve inversions have been a generally reliable indicator of an impending recession.  As of writing, the current 10-2 yield spread sits at +0.24%, very close to an inversion.  Inversions occur when blue line goes below the red horizontal line, shaded areas are recessions. (Source: The Economist)

Sounds easy right?  Just sell all your stocks when the yield curve inverts and you will dodge a recession.  Unfortunately, as with most everything in the investing world, it is not that simple.  As Credit Suisse’s chief U.S. equity strategist Jonathan Golub recently said in a note to clients, “stocks rise an average of 15 percent in the 18 months after shorter-term Treasuries start yielding more than their longer-term counterparts.”

To further complicate matters, while a yield curve inversion is a reliable predictor; it is horrible for timing.  In those past seven inversions, the recession came anywhere from 14-34 months later; and the curve can stay flat and close to an inversion for years, most notably from 1995-1999.

Additionally, and perhaps most importantly, is that current conditions can help explain the shape of the curve in ways that are not ominous.  The Federal Reserve’s recent decisions to raise short-term rates reflect a return to normalcy after a decade of ZIRP (Zero Interest Rate Policy), domestic strength and a tight labor market, rather than a looming recession or excessive inflation.  Golub went on to say, “Historically, an inverted yield curve has been accompanied by a variety of other ominous economic signals including layoffs and credit deterioration. There is no historical precedent when yield curve inversion, in the absence of corroboration from other signals, has led to a downturn.”

As for the long end of the curve, it can be at least partly explained by the relative attractiveness of U.S. yields when German and Japanese government bonds are yielding near zero.  More buyers of U.S. bonds would keep those long yields held down.

As described above, the yield curve inversion is not a good timing indicator, and market returns during the flattening and inversion periods are typically above average. (Source: LPL Financial) 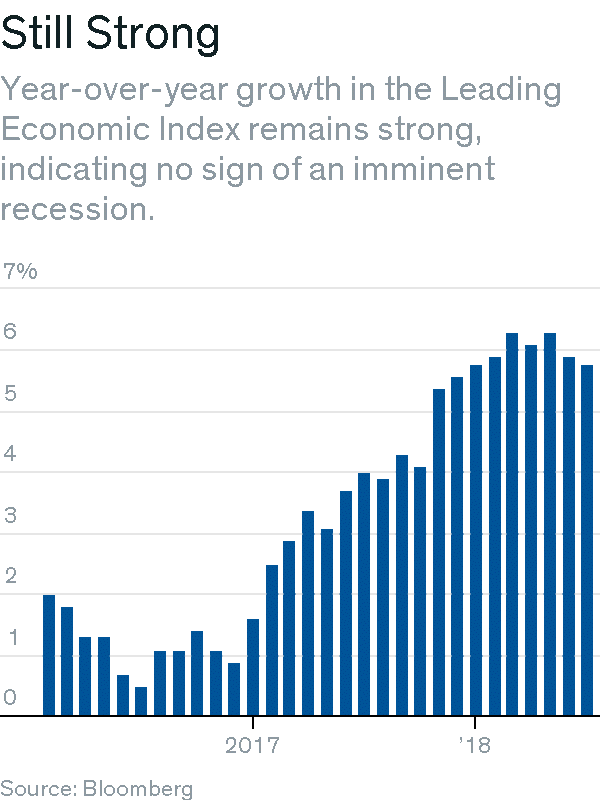 The index of leading economic indicators by The Conference Board is still showing strong growth and no sign of an imminent recession.

The takeaway here is that while the yield curve is an important economic indicator, relaying timely information about the state of money flow and credit, it is not the silver bullet recession blocker that some pundits have been making it out to be.

The opinions voiced in this material are for general information only and are not intended to provide specific advice or recommendations for any individual.  To determine what is appropriate for you, consult a qualified professional.

The economic forecasts set forth in the presentation may not develop as predicted and there can be no guarantee that strategies promoted will be successful.