An already bad situation in Venezuela is spiraling out of control.  Humanitarian aid is being blocked at the border by the regime of socialist dictator Nicolas Maduro and the dire economic situation in the country is leading to calls in some circles for US military intervention.  This month we examine the economic side of this story.

Hyperinflation is perhaps the most severe economic sickness that a country can contract.  It makes day to day life of ordinary citizens almost impossible to plan for and puts a freeze on international transactions.  According to the International Monetary Fund (IMF), the inflation rate for the Venezuelan bolivar could reach an absurd, unfathomable 10 million percent in 2019.  Just the last twelve months has seen inflation of approximately 177,000%.  For reference, the US Federal Reserve has an annual target of 2% inflation of the dollar, and anything approaching 5% would be considered a crisis.  According to a study by the Venezuelan National Assembly, by the end of 2018 prices were doubling every 19 days on average.    If the IMF projections prove correct, prices could double every few hours by the end of this year. 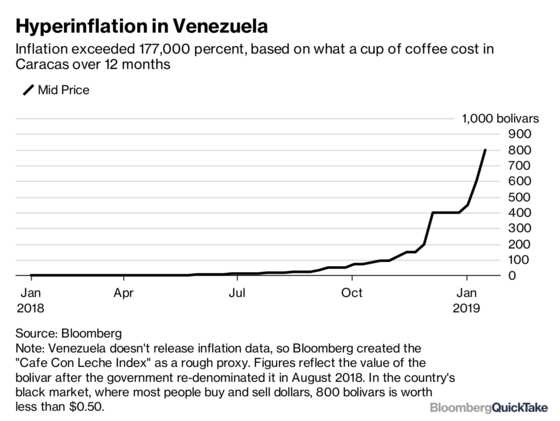 The economic situation in Venezuela has been troubled for years, but it is only over the last 12 months where extreme hyperinflation has come in and ravaged an already strained financial system.  It is only going to get worse..

Once one of the wealthies countries in the America’s and with more proven oil reserves than Saudi Arabia, Venezuela’s downfall can mostly be attributed to its almost total reliance on oil exports and the collapse of oil prices in 2014.  Corruption by both the government and business leaders, unsustainable socialist policies by former leader Hugo Chavez and current President Maduro, and international sanctions all had contributing effects, but at the heart of the story is oil.  According to Bloomberg, oil accounts for 95% of Venezuelan exports.  When the price of the commodity collapsed by more than 50% in 2014, the effect on the finances of the country were devastating.   As the prices fell, so did production, and as production fell, so did employment.

Since the boom period of the late 2000’s and early 2010’s, the price of oil has remained significantly lower than the $100 / barrel mark.  Chart source finviz.com. 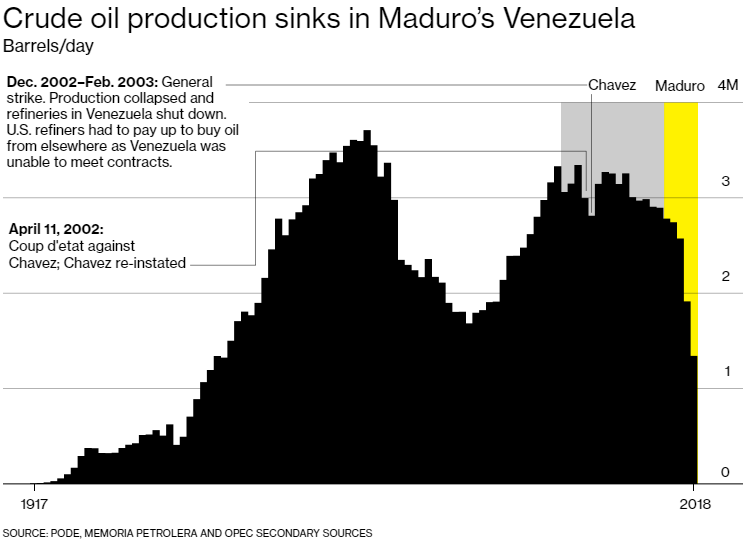 Venezuelan crude oil production is sitting at lows not seen in 70 years.  Observers worry that further cuts to production will require facilities to be taken offline, which could cause permanent damage to wells and rigs, requiring significant lead time to bring back into service.

Capacity utilization has collapsed towards 20%, an incredible decline in such a short amount of time.

Along with the decline in exports, came a decline in imports.   According to data compiled in a report by Torino economics, “between 2012-2017 imports of goods and services fell by a staggering 80.9%.”  The country’s non-oil sector is almost exclusively involved in the redistribution of imported goods and services.  This knock-on effect sent the unemployment rate skyrocketing, which will likely come close to 40% in 2019.  Additionally, since most of the consumer goods are produced elsewhere and imported for use, as those imports fell the shelves in the stores were left empty.

The blame game is in full effect on both sides.  Pro-regime supporters point to external circumstances in oil markets and the international sanctions on the Maduro regime while the opposition points to rampant corruption, socialist excess, and a failure to diversify the economy as the causes of the current crisis.  There is truth to both of those arguments.  All these factors contributed to the decline of the Venezuelan state and the suffering of her citizens.

One thing is clear, the current situation is unsustainable.  As many countries are now not accepting Venezuelan exports, the oil storage capacity is almost exhausted.  Soon, they will have to shut down facilities and risk permanent damage to wells and production capacity which will only exacerbate the problem.  It is unclear whether top military leaders will remain loyal or will eventually defect, but even if Maduro was removed from office today, it will likely be years before the country’s economy can be stabilized.